It's the middle of July, which means that I am starting to think about the fall term. I've already had several families inquire about fall lessons, so I've spent some time this week thinking about the fall calendar, picking a recital date, creating the registration form...and deciding to let some students go.

I've previously posted about my thoughts on letting students go and how this doesn't mean you've failed as a teacher. That realization has been so healing for me. I've come to discover that knowing when to let go is actually a sign of respect, both for the student and for yourself.

That being said, I made the decision this week to finally let go of a family whose respect toward my time and resources has been nonexistent. I'd been trying so hard to just make the best of it, but it only resulted in mounting stress from one term to the next. I've finally come to the decision that the best scenario for all parties involved is to let them go. As I made the decision, a HUGE weight felt like it had been lifted off my shoulders. There's something so freeing about realizing that as a teacher you have an option, you're not just stuck with what you get! There's no rule that says we as teachers have to put up with a lack of respect, and it's not being respectful of myself when I let other people treat me that way.

It's taken me awhile to embrace this mentality and feel comfortable with the idea, but now that I've accepted it my entire approach toward teaching has changed. I feel so much more positive about lessons! I'm really hoping that this decision will help foster a better perspective toward lessons as the fall term gets closer.

Have you ever had a family who showed little or no respect toward you as a teacher or as a person? Did you feel guilt over getting rid of them? What helped you to step up and decide to respect yourself and your rights as a teacher?
Posted by Sarah at 11:00 AM 8 comments:

Sometimes students can have a hard time grasping the concept of playing with a metronome. As someone who has played the piano for years playing (and staying) with the metronome seems easy, but for beginning students it can be hard enough to just try and coordinate their fingers!

That's why I came up with this simple metronome log that I'll be using with some of my students over the remainder of the summer. The concept is very simple. Each week they pick a favorite piece to review using the metronome. The piece is already semi-familiar, so we can really focus on helping them learn how to stay with the metronome. 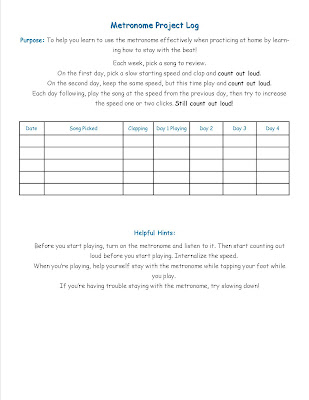 What kind of ideas have you come up with for students who may have had some trouble learning how to effectively use the metronome? I'd love to hear your ideas!
Posted by Sarah at 11:24 AM 2 comments:

I started this blog in January of 2011 as an outlet for my many musical musings, a place where I can get my teaching questions answered, and a bit of publicity for my home studio. I hope to meet many other musicians and teachers nationwide through this blog- so please- take some time to read and leave a comment. I look forward to meeting you!

Sarah Lantz is a private piano teacher operating out of Howard County, Maryland. She has been teaching since her senior year of high school and enjoys incorporating her creative abilities and ideas into weekly lessons. In addition to her studio, Sarah serves as church musician at Springfield Presbyterian Church, accompanies, and plays for weddings and other private events.

Please feel free to contact me with any questions or comments you may have, either by leaving a comment here or via email at sers184@gmail.com.